‘Fake vs. fact’ PowerPoint rejects election fraud claims and concerns, one by one

LINCOLN — Nebraska Secretary of State Bob Evnen, in a PowerPoint presentation sent Saturday to all 49 state senators, is pushing back against contentions of election fraud and irregularities during the 2020 election.

The PowerPoint, entitled, “Fake vs. Fact,” rejects, one by one, allegations made by a group claiming to seek “accuracy” in elections.

The presentation, among other things, said some laws cited by critics don’t exist; allegations that some votes couldn’t be matched with registered voters were false; and claims that the state’s voting machines aren’t tested were not true.

“The Secretary of State’s Office is fully informed of the concerns and claims that have been raised and has fully investigated them,” the PowerPoint says.

Evnen, in an interview, said he sees “no justification” for a full, forensic audit or a hand recount of the 2020 election results in Nebraska, as called for by at least one group of critics.

The first-term Republican said his office doesn’t have the authority to take such steps without approval by the State Legislature.

“But if (the Legislature) wanted it, and was filling to pay for it, I’d do it,” Evnen added.

He said he produced the presentation for lawmakers and held two briefings with senators last week because it was important to provide a response to “people who are of a rational mind.”

Brewer wants to see a meeting

Evnen said some people won’t be convinced no matter how much information he provides. “They’re not looking for information, they’re looking for confirmation” of conclusions they’ve already reached, he said.

But State Sen. John McCollister of Omaha, who has seen the PowerPoint, said some people’s opinions may be swayed by it.

“I thought he did a fairly good job of totally answering the points raised by those people who thought the election was unfair or badly managed,” McCollister, a Republican, said.

Gordon Sen. Tom Brewer, a Republican who chairs the Legislature’s Government, Military and Veterans Affairs Committee, said he thought the PowerPoint did a good job of answering most of the criticism. But Brewer said he still thinks a face-to-face meeting between Evnen and the main group alleging irregularities, the Nebraska Voter Accuracy Project, would be helpful.

“I think you could put some closure to some of these things if they met,” Brewer said.

Many of the allegations about the 2020 election count — including one that 4,001 votes cast could not be linked to registered voters — came out during a public hearing last week before the Government Committee on a bill to ensure security of election “drop boxes.”

Proponents of Legislative Bill 1263, which was introduced on behalf of the Secretary of State’s Office, said there are no current laws concerning how drop boxes should be secured or how often ballots should be collected. The bill seeks to provide security standards for drop boxes. It was supported by a major voter rights group, Civic Nebraska.

The hearing also featured testimony from a handful of members of the Nebraska Voter Accuracy Project group, who claimed there had been widespread fraud during voting in 2020 in the state.

Members of the group charged that Evnen’s office “wasn’t listening,” “wasn’t looking” for fraud and had “underestimated” the cunning of those committing the fraud they suspected had occurred.

That group also alleged that the state’s election counting machines aren’t tested for accuracy — a claim Evnen said was entirely false. In 2019, the state spent $7 million to update its ballot counting system, purchasing equipment from Omaha-based Election Systems and Software.

Evnen said the equipment, according to a state contract, is subject to “penetration and vulnerability scans” by an independent “tester,” either the Department of Homeland Security or a third party with expertise. The scans are not shared with the public, he said, because of security concerns that a “bad actor” could tamper with voting.

In addition, representatives of ES&S recently came to Nebraska to demonstrate their equipment to state senators and answer questions.

“I don’t see any evidence that there’s problems with the machines of any kind,” Evnen said.

The 4,001 votes allegation was false, the PowerPoint stated, and was based on a comparison of voter registrations on Election Day  2020 and on Jan. 1, 2021.

Voter registration lists are updated almost daily across the state, Evnen said, and the difference in the votes cast on Election Day 2020 and the number of registered voters the following Jan. 1reflects that. For instance, 4,238 registered voters were reported to his office to have died in the two months after the 2020 election, which accounts for some of the difference, he said.

The accuracy group maintained that the Secretary of State’s Office had received “hundreds” of affidavits alleging voter fraud, while the PowerPoint said no affidavits had been received.

Another allegation was that there was an election-night “reduction” in the vote count for then-President Donald Trump.

That, the PowerPoint said, was a mistake by Edison Research, a third-party service associated with the New York Times, which erroneously reported results posted by the Secretary of State’s Office.

Brewer said after last week’s hearing on the drop box bill that he would arrange a meeting with the accuracy group and Evnen. On Sunday, Brewer said he would share the PowerPoint with that group but would also like to see a meeting happen.

Evnen, a Lincoln lawyer, was elected Secretary of State in 2018. During the campaign, he pledged to seek voter-ID laws.

He is seeking re-election this year. One other GOP candidate has filed so far for the post, Rex Schroder of Palmyra. 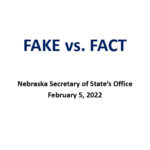 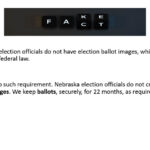 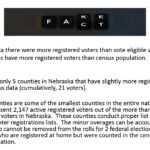 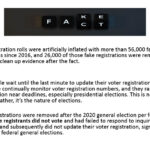 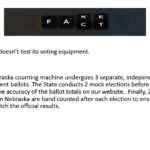 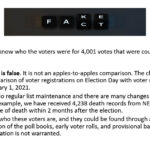 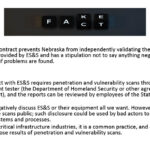 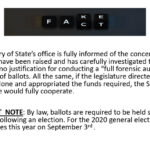 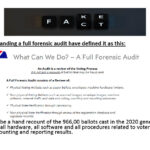 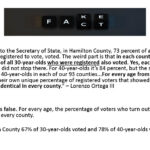 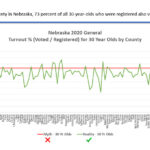 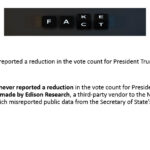 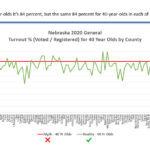 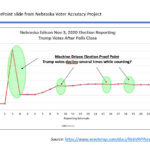 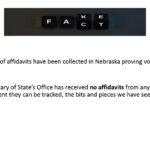 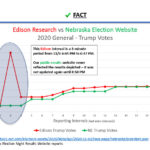 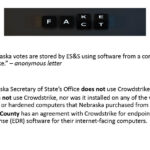 Our stories may be republished online or in print under Creative Commons license CC BY-NC-ND 4.0. We ask that you edit only for style or to shorten, provide proper attribution and link to our web site.

Senior Reporter Paul Hammel has covered the Nebraska Legislature and Nebraska state government for decades. He started his career reporting for the Omaha Sun and later, editing the Papillion Times group in suburban Omaha. He joined the Lincoln Journal-Star as a sports enterprise reporter, and then a roving reporter covering southeast Nebraska. In 1990, he was hired by the Omaha World-Herald as a legislative reporter. Later, for 15 years, he roamed the state covering all kinds of news and feature stories. In the past decade, he served as chief of the Lincoln Bureau and enterprise reporter. Paul has won awards for reporting from Great Plains Journalism, the Associated Press, Nebraska Newspaper Association and Suburban Newspapers of America. A native of Ralston, Nebraska, he is vice president of the John G. Neihardt Foundation, a member of the Nebraska Hop Growers and a volunteer caretaker of Irvingdale Park in Lincoln.